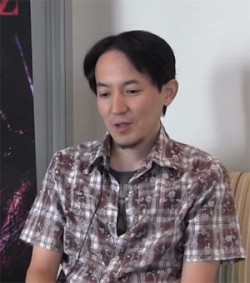 In our exclusive interview, he told us some of the game secrets, and gave us some clues of what lies ahead on the series’ future.

REVIL: Claire and Moira were infected with T-Phobos virus just like the other members of Terra Save. Why didn’t they turn into Afflicted? The girls still have the virus inside their bodies?

Yasuhiro Anpo: Claire’s been through and survived dangerous predicaments on several occasions already, and as such she was able to survive the horror of Revelations 2without getting too panicked, and thus not mutating (notice how her bracelet only gets up to orange all the way through the end). Moira’s fate, on the other hand, changes depending on what action the player takes after the fight with Neil. During the scene where Claire is being assailed by Neil after the elevator goes down, if Claire is the one to deliver the finishing blow to Neil, Moira has never overcome her fear of guns, so after getting trapped by the debris at the end of episode 4 she is unable to hold back the fear and is taken by the virus. If, however, Moira delivers the final blow on her own, she’s able to overcome her fear and save Claire; so, because she’s overcome her worst fear she’s able to stave off her fear even when trapped under the debris.

R: Since Alex survived the shot in the head because of T-Phobos, the virus also saved Moira’s life after the Monument’s collapse?

YA: Actually, the monument doesn’t completely collapse – only part of it does. We did that on purpose so the player would be able to search the remains as Barry. The idea is that Moira was able to use the remaining debris as a foothold and find her way out. She is then saved by Evgenny, who had come to investigate the collapse himself. That being said, one way to look at it could be that T-Phobos had accelerated her immune and recovery systems, which may have contributed to her survival!

R: Natalia is said to be the perfect vessel for Alex’s mind, because she can’t feel fear after the Terragrigia incident. But while she is wearing the bracelet, its color is always red. Since T-Phobos responds to fear, why isn’t her bracelet always green, just like Neil’s?

YA: The sensors found on each of the test subjects change color according to the amount of adrenaline secreted into the subject’s blood stream. However, if a subject is able to “win” over their fear, mentally speaking, even though physically they have adrenaline pumping through their body – that is having truly conquered their fear. In that case, the sensor will just stop at displaying red. In other words, that is exactly what Alex was looking for in a compatible subject. The same goes for Moira as well – once she overcomes her fear, her bracelet will also stop at red.

R: Regarding the relationship between Claire and Neil, were they boyfriend and girlfriend? Or did Claire have some platonic feelings for him?

YA: For Claire, Neil is supposed to be the kind of superior she can respect… as well as the kind of man she’s attracted to. In actuality, their relationship was more on the co-worker and friendship level as opposed to anything more.

R: Regarding the “good ending”, are Natalia’s and Alex’s minds living together inside the little girl? During all Barry’s campaign he was accompanied by a confused Natalia or just Alex pretending to be a child? At some point, will Natalia’s mind completely “turn” into Alex’s mind?

YA: At least until some way through Barry’s campaign, the part of Alex that resides in Natalia hasn’t yet awakened – so through that point, Natalia’s conscience has complete control. However, Alex’s memories have become mixed with some of Natalia’s, so the reason Natalia exclaims, “Moira!? She’s dead…” is because fragments of Alex’s memory have become mixed with Natalia’s and she hasn’t gotten a handle on the fact that they are different at that point in time.

The transfer of Alex’s memories was not 100% completed, so in order for Alex’s personality to become a dominant force within Natalia, a trigger became necessary. One of those triggers can be seen in the “bad ending” – when she is truly put in a life threatening situation. In the “good ending,” Natalia escapes right before that point, so she escapes with her consciousness still as Natalia. What happens to her, how she lives her life after the ending, however, is something that we’ll have to save for the future. Hopefully the fans will enjoy debating and theorizing amongst themselves.

R: Why was Alex terrified of Natalia by the end of Episode 3? Did she see her “old self” inside the girl? If Alex decided to kill herself and live “inside” Natalia, why did she change her mind and tried to kill Natalia instead?

YA: At that point in time, Alex saw Natalia as a failed experiment – she was supposed to become Alex, but had at that point remained Natalia. When Alex is choking Natalia, who is near death, for a split second the Alex existing deep in her consciousness awakens. When Alex looks at Natalia’s eyes, she comes to the realization that Natalia wasn’t a complete failure – just that Alex hasn’t awakened yet. Now “two Alexes” exist in this world. Alex’s very existence has been shaken, and she becomes frightened of Natalia, who, deep inside, is becoming a “new” Alex. Alex, who is near death but clings to life, decides she needs to destroy Natalia and once again become “the one and only Alex.”

R: REVIL had a chance to interview Mr. Okabe last year and we asked him about Alex Wesker as a possible villain. We were lucky and had a good guess, but every RE fan was anxious to see her in a game since she could be a great villain, just as Albert was. That open ending in the game is a hint that Alex can return in a future game?

YA: From our point of view it would be great to use her in the future, to continue working with this villain that can provide a new chapter in the Wesker saga. If fans are vocal enough about wanting it, I think that could only increase her chances of showing up in the future.

R: Why did you decide to make Alex a woman? Do you think we need more female villains in the series?

YA: Albert Wesker is the most appealing villain Resident Evil has ever known. Because of that, we felt that any other male villain would need to top him, and that’s difficult to do. So, we decided that, by making this other Wesker a woman, we could create a brand new character who would stand out on her own merits, different from those of Albert. One thing Alex shares with Albert is the concept of eugenics, but I think that she’s able to separate herself from Albert with her “malice induced madness” that we see in Barry’s portion.

R: Movies like Avatar, Inception, Transcendence and Captain America: Winter Soldier had the mind transference theme in their plots. Besides Kafka’s books, was there any other inspiration for Resident Evil Revelations 2?

YA: Other than Kafka, nothing in particular comes to mind.

R: Resident Evil Revelations 2 was a very unique experience in the series: episodic format, new coop system and loads of nostalgia for old fans of the series. Does Capcom have any plans for a “Revelations 3” using this same formula or would you want to try something new next time?

YA: We received more positive feedback from players on the decision to offer the episodic option than we anticipated, so to that point, I think we’ve seen some solid results. We’ve also learned a lot from doing this and there are some things that worked great, and others that we would need to improve on for the future. Regardless of how the content is delivered, if we are able to create a new story, I would  definitely want to continue the “return to roots” and “homage to past titles” formula that has become a trademark of the Revelations series now.

Special thanks to Fabio Santana, from Capcom-Unity Brasil, for the support. 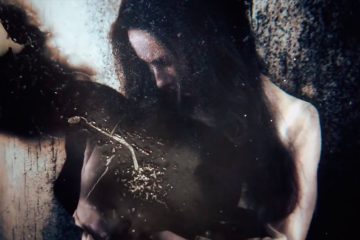 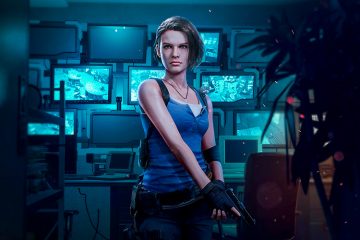